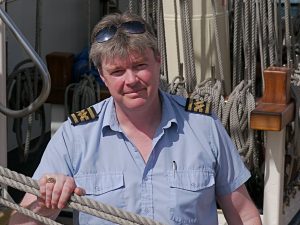 “One one of my early trips we were in Tenerife in 2000.  I remember walking ashore with a mix of PC and VC and coming to the point where we crossed the road.  In the mix was one VC in a “sports” wheelchair – one with a low back and, usually, no sides –  and just as I was about to ask if he wanted a hand, he shot off the kerb, across the road and bounced up onto the pavement on the other side. This was in my first stint with JST and the first time I’d seen this done. Did he need a hand? Hardly, he was quicker across the road than the rest of us.

I remember our first tour round the UK in the summer of 2001, when we were showing off our new ship in various UK ports.  All through various periods of Open Ship and in pretty much every port we went to, there would be an occasional group of people standing around looking on whilst one of the group pointed and said “…and I built that bit.”  We have a great ship, built twenty (and more) years ago by over 1500 volunteers, most of whom used to sail with us – and some who still do.

I can’t quite remember, but probably 2003 or maybe 2004, but I remember watching a wheelchair user climb the rig on an assisted climb.  Not perhaps that unusual, except that this was the first time I’d seen a double amputee go aloft under his own steam.  Not a youngster, and with one leg amputated above the knee and one below, this guy went aloft on his stumps.  After this, our then Medical Pursor bought shinpads and knee pads to make it a little less painful for the climber and to avoid us having to scrub the blood off the ratbars in future!”