We’re off! The Dangoor Infinity 2019 expedition to Iceland is underway. Sailing aboard SV Tenacious is a team of 47 drawn from the British Exploring Society and the Jubilee Sailing Trust. We’re a combination of mixed-ability Young Explorers, Leaders, Watch Leaders, Volunteer Crew and Permanent Crew. We’re sailing a tall ship (Tenacious) to Iceland, to swap places with a team that’s been trekking for two weeks on land. At time of writing, we are just west of the Isle of May, 27 nautical miles out of Edinburgh. We are beyond excited (who wouldn’t be!). So far, we’ve stood watches, steered the ship, acted as lookouts and braced the yards. And we’ve seen puffins, seals, gannets, cormorants and a lot of gulls. Here’s what some of Lounn Fire (Aft Port Watch) have to say about things so far…

“Fun, but feeling a bit queasy!”

“Fun, and NOT not feeling queasy!!”

“I haven’t eaten this much food in ages”

“It’s spectacular – I don’t know exactly where we are, but it’s beautiful”

“Not enough puffins yet”

“Light winds, calm seas, a fantastic team and adventures ahead – who could ask for more?!”

Today is day 3 of the expedition, highlights include the muster and lifejacket drill taking place during the only time it rained today, this resulted in everyone getting soaked. We also released the sails for the first time and turned the engine off. We experienced “happy hour” for the first time, this involves cleaning the ship top to bottom. We are currently just east of Orkney, feeling settled and hyped for what is to come!

Day 4  06-08-19 Fire Sol.
On Tuesday 6th August 2019, I woke up at 8am and went down to the lower mess. Afterwards we had a watch meeting with Peter, Nando, Rebecca, Mike, Charlie, Renee and Josh. After the meeting we went to get our harnesses on to climb the mast and out along the yards. Afterwards we had smoko and I had a hot chocolate and two chocolate cookies. At 11.50am we had a delicious lunch of pasta made by Ian, the cook. At 12.30pm we went upstairs to the bridge and switched with the other watch and with help from Rebecca I took over helming/steering the boat which was incredible fun. We have travelled 308 miles since leaving Leith Harbour and we have 9 sails up and have been sailing for 3 days.

Enjoying the trip so far, food is delicious which we did not expect, and liking the people. The best part of the day is playing cards. I am now starting to enjoy the watches.

This is day 5 of the Dangoor Infinity Expedition. We have just passed the Faroe Islands and are in Danish waters. We had a late-night watch last night and the wind was gusting at 28 knots. This meant we had to take the T’gallant sail down which was very hard work. Today the wind is not to strong and we are having a pleasant sail. The T’gallant has been put back up. Only one person has been sea sick today so far. The food on board is very tasty and we are all having loads of pudding (especially the sticky toffee pudding)! The dolphins that we saw yesterday have not returned ☹. However, there are plenty of birds to keep us company. Watch duty is becoming very repetitive with the occasional fishing boat and ferry sighting becoming ever more exciting.

P.S. Elizabeth asks her parents to not let her dog (Lola) get fat while she is away

Day 6  08-08-19
Last night we had a goodnights sleep, well, sort of, the waves never know when to stop slapping. Also, Josh’s very excitable wake-up call didn’t seem to balance out Charlies’ monotonous call on the sighting of some whales. Besides from that it’s quite interesting, we put down some of the sails, had a talk about sails, tried to remember all the low frequency jargon, just been told we’ve another one coming – sextants! which is an instrument used to measure the angle between the horizon and a heavenly body, for example, stars. Onto bigger priorities, the cheese and ham toasties for lunch were quite frankly delicious. Chef Ian puts Gordan Ramsay to shame. Becca decided to have Weetabix for her tea yesterday as we’ve discovered life on ship is what you make it and cereal before bed seemed like the right thing to do. Kieran and Becca climbed to the top of the main mast which is very impressive. We’re currently on our first watch of the day, the sun is looking beautiful with an extraordinary view of the sea that we’ll never tire of looking at.

Safe to say we are all very much enjoying our time on the ship and looking forward to reaching Iceland.

Today is the 8th day of expedition in which we are continuing to sail to Iceland. With it brings the gentle kiss of sea spray and the hopes of a glimpse into the Arctic Circle.

The day started with a reasonably calm sea and then came forth the gradual introduction of waves of a moderate height of 2-3m. This urged nearby birds to seek shelter alongside the ship seemingly joining us in our voyage. Amongst these were Fulmars, Skuas, Gannets, Kittiwakes, Puffins, and Guillemots in large flocks. This was one of those experiences that transports you to a mystical realm.

It should be noted that while I am writing this, my hands are freezing and the ship is pitching a lot. But alas! It is such experiences that grow you as a person and stick with you for a lifetime. Therefore, the freezer like temperatures enveloping the ship are worth it absolutely.

This is day nine of the Dangoor Infinity expedition. We spent a lot of yesterday inside due to the strong northern wind. It is still very choppy and we can see the Snaefelljokull mount on the west coast of Iceland two points starboard off the bow (right hand of the ship). There have been many birds circling the ship for days now and we also had a new voyage crew member whilst on watch last night. A Tern was on the stern. The weather has definitely calmed since yesterday but is due to increase in wind speed. We hope to reach the Fjord of Akureyri in around six days.
God bless, lots of love from Amy and Adam xx

Waves are weird,
one minute you’ll be watching them rock and roll and you’ll feel at peace
with the whole universe.
You’ll just stare, mesmerised!
However, in a matter of seconds the ocean can become a churning monster;
storming towards you.
Your heart is pounding. It’s all consuming.
But then.
Everything changes again!

During this watch we are looking at a lovely view of the lovely surroundings of the mountains and sea. We spent last night at anchor near Reykjavik, a couple of the young explorers set up a fishing rod at the aft of the ship but sadly did not catch anything. Today we were celebrating one of the permanent crew’s birthday and chef Ian made him a delicious chocolate cake. One of the young explorer’s quote of the day is ‘Up the top of the mast is like a seesaw.’ – Becca (Young Explorer)

The views coming into Iceland have been utterly amazing and I have never seen anything like it. Now that we’re coming to the end of the boat phase I’m trying to enjoy all the moments I can, even the midnight to 4am watches.
Charlie Batten

Today is the 12th day of our expedition. We are currently preparing to dock into Reykjavik. It has been an eventful day in which we swam in Icelandic waters. The temperature was 10 degrees, but it felt like it was sub-zero. It did not put any of us off despite many of the permanent crew telling us that we were mad! This experience was rather terrifying yet it was the highlight of the day.

We have all had our kit checked and are packing ready to continue our expedition. We have been told that we will not have any shore leave today. Later we will dock and go through immigration leaving little time for much else. We have braced the yards and put up some of the sails so we set sail. However, we later took them down as we were going too fast.

We are all very much looking forward to stepping on dry land again (as dry land does not move or splash us!).

Dictated by Renee
Typed and added to by Niamh

Captain’s blog – A life on the Tenacious Wave 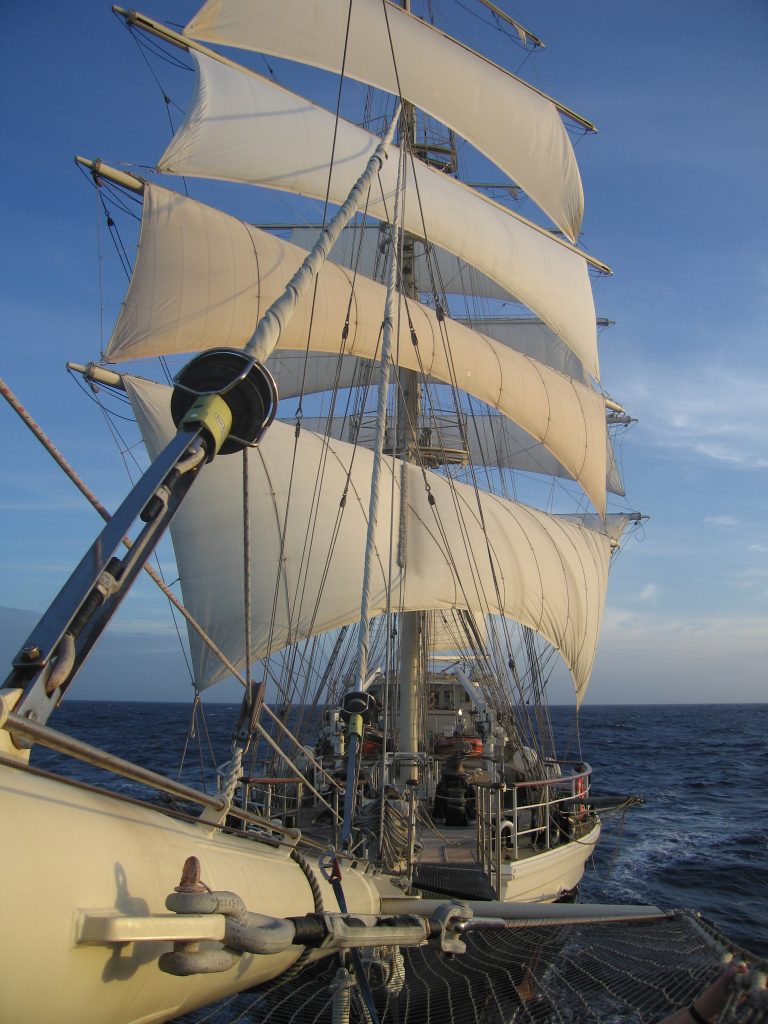 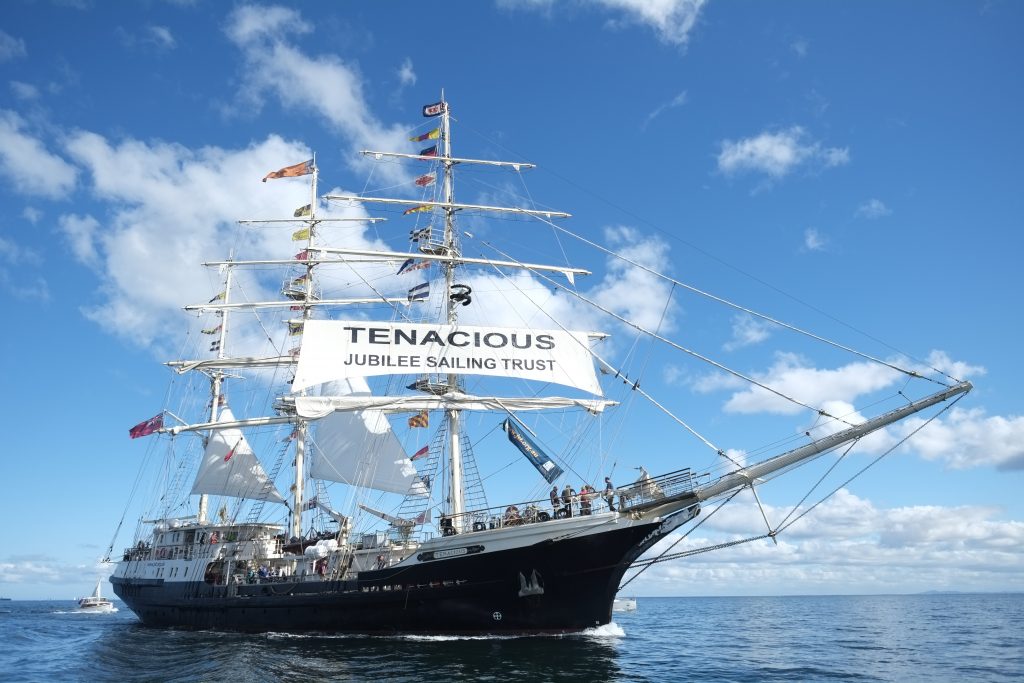 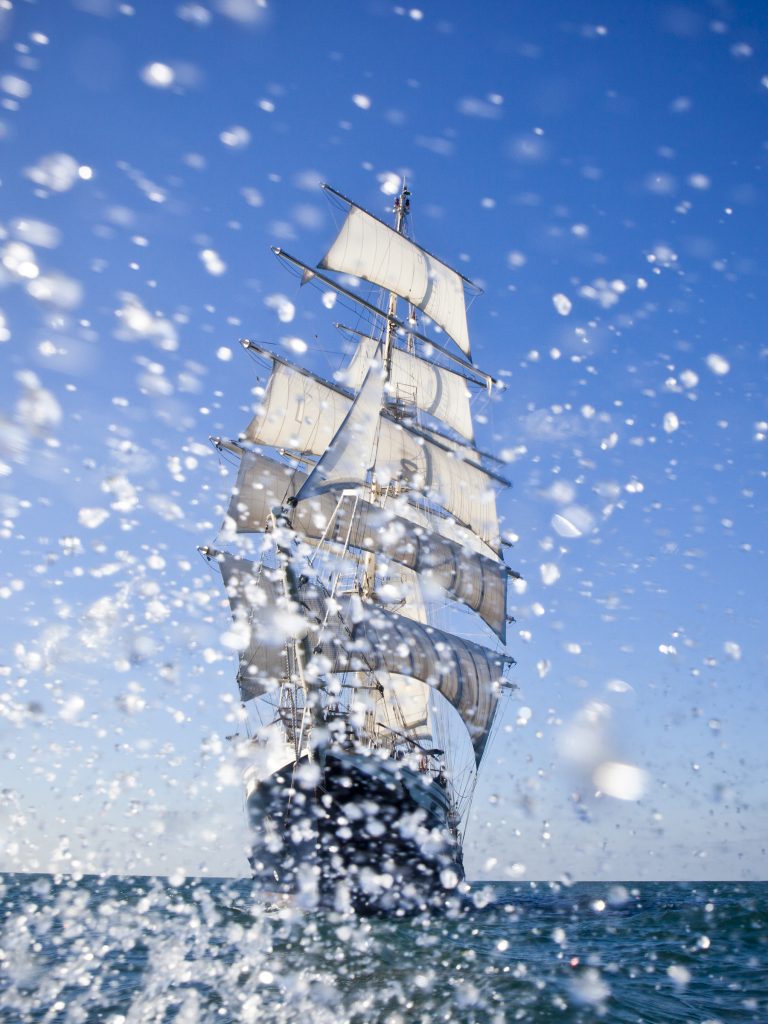 Blogs from the ship – our first Royal Navy voyage 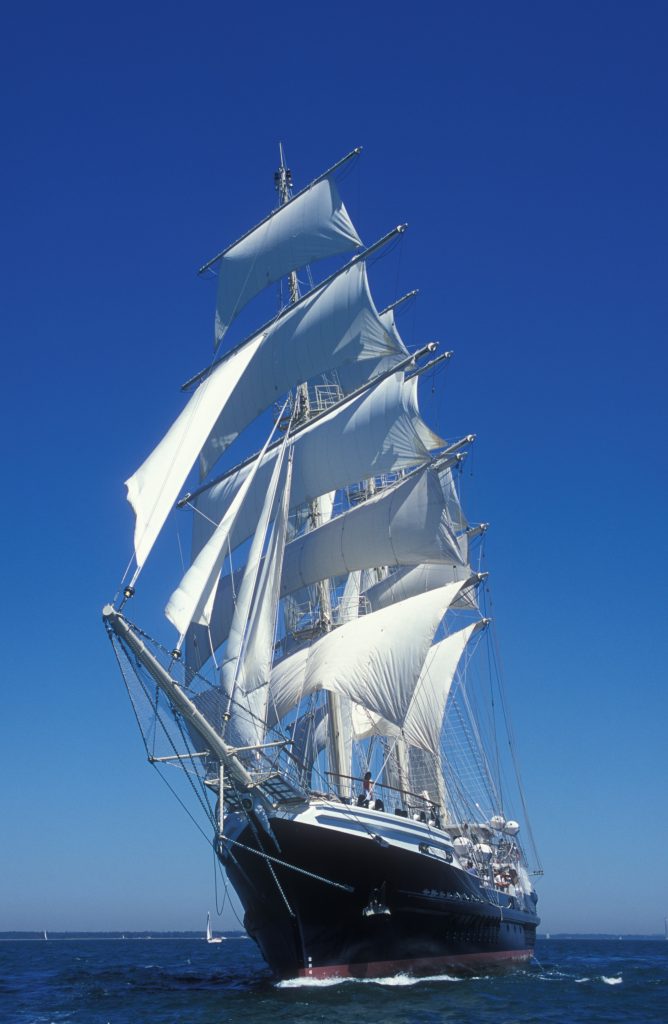 Captain’s blog: Sails for the season ahead (26th December)

Captain’s blog: A big thank you is due (30th November)